My cultural side wanted to take a ferry to the nearby island of Delos, with its architectural remains of the Temple of Apollo,

but my lazy, tourist side won the battle.  Hence we spent the next few hours wandering around the island of Mykonos, browsing and shopping for local products.

Mykonos is full of stray cats (similar, but on a smaller scale, to Istanbul).  As usual I couldn’t resist any of them and shared my Gyros lunch with a ginger and white tomcat, although I kept my yummy, flaky, crispy Baklava to myself.  But cats don’t appear out of nowhere; they have to start off as appealing little kittens.  The first one I came across was a friendly little tabby, who was quite happy for me to pick him up and cuddle him.

However he was more interested in food and proceeded to try to suckle my clothes and was perfectly happy for me to stay with him.  As I’m not a nursing female cat, the best I could offer him was some water, and had to leave him to fend for himself.

The next kitty was a tortoiseshell that was equally friendly and bold with people, but not so brave when it came to an encounter with the island’s tame pelican.

His response to this huge bird was to climb a nearby tree and look anxious.

You can’t visit Mykonos without climbing up high to see the old windmills that no longer turn.  We duly visited, along with all the other tourists and our cameras, until we’d photographed everything possible and it was time for lunch. 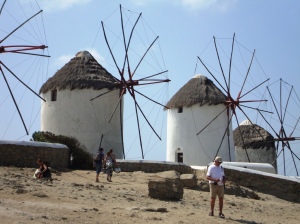 An overnight sailing brought us into Haifa in northern Israel.  What a contrast between this city and Ashdod!  The port has views of the Carmel (and the Bah’ai Temple) that lure the visitor to want to explore this beautiful city.

Despite having arranged for a hire car, we still had to negotiate the local taxi drivers, 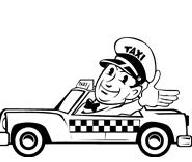 who were all touting to show tourists around this area of the country.  We finally struck a bargain with one of them, who dropped us at Eldan to collect our car (with fewer dents than the previous one).  First stop was my sister-in-law’s grave high up on the Carmel and overlooking the Mediterranean.  What a beautiful, tranquil spot for a cemetery.

All this had taken longer than anticipated so an iced coffee

was needed, and a three-legged dog petted, before we made our way to Tiberias.

The area around the lake is much lower than Haifa, and consequently much hotter.  However the views across the Sea of Galilee and over to the Golan Heights

were spectacular, especially when accompanied by a plate of the local St Peter’s Fish,

dutifully shared with a local black and white cat.  Moggies the world over treat humans as their slaves, but they do it in such a way that animal lovers cannot help but be seduced by them.  I’ve always said that felines have tremendous chutzpah, but Israeli cats have even more than most. 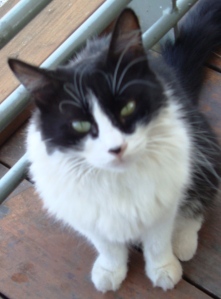 After a brief paddle in the lake, and no walking on water for mere humans, it was time to wend our way back to the ship and say goodbye (or shalom) to Israel. 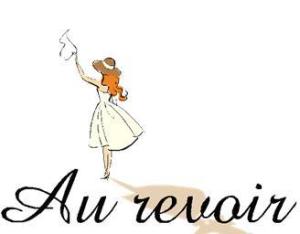