I’ve suffered and struggled with migraines for at least thirty years.  On my worst days I just have to give in to them and rest, but at other times I try to keep going and certainly find it helps a little to swear at them, in the hopes that they really will b****r off! 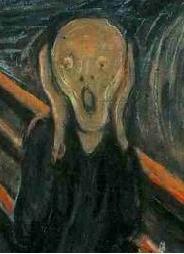 I can’t believe that I’ve only just discovered (and joined) Migraine Action, an association that was founded in 1958 to support migraineurs and specialist clinics and to help research into migraine, its causes, diagnosis, prevention and treatment.  I had the opportunity to attend their recent AGM and education day in London, and am so pleased that I didn’t have a migraine on that day and had the opportunity to meet so many other sufferers, and to listen to, and get advice from, some of the country’s leading specialists in the field.

The day was focused on three major topics.  The first one was a talk on preventative treatments for migraine and was presented by Dr Manjit Matharu, a consultant neurologist at the National Hospital for Neurology and Neurosurgery, where the day was also organised.  The first interesting fact I gleaned is that migraine is a brain disorder and there are approximately five million sufferers in the UK.  Although there are a few basic symptoms, many of us also report other experiences and variations, and a horrifying third of all patients don’t respond to any treatments.  We talked about the various over-the-counter analgesics that are available (although they must be taken at far higher doses), complementary supplements that can be bought, along with the recommended doses, and the prescription only preventatives, along with any side effects.  We were also given scientific data relating to the trials of the various medications, so that we could weigh up how useful they have proved and compare their use to the results achieved from taking placebos.

Dr Andrew Dowson is the Director of Headache Services at King’s College Hospital in London.  He outlined the available acute treatments and the latest research into treating migraine.  Again we were given facts and figures regarding treatments and learned about some of the research that is currently ongoing.  This includes needle free injections and transdermal patches.  He also explained the differences between the various triptans that are generally prescribed to treat migraines, and advised me to try an alternative to the one I’ve been taking for years.  So I’m off to see my doctor next week, duly armed with my information.

The third speaker was Dr Sue Lipscombe who is both a GP, and a headache specialist.  She was more interested in discussing ways of managing migraines and also of encouraging alternative and complementary therapies and treatments.  Although scientific data rules out the effectiveness of chiropractic and acupuncture (to name but two) we were given evidence to show that these treatments have worked with some sufferers.  Nobody is sure if there is a placebo effect or how the results can be explained, but it seems there is a case to be answered for these other therapies.  She even cited a sceptical patient, who had no belief in a therapy being offered to her, but who contacted her several weeks later, having been migraine free since that time.

All in all an extremely useful and informative day and a chance to chat to other migraineurs.  It was a shame to learn that Migraine Action is struggling to raise funds just now, so we need to recruit as many members as possible, and to find other fundraising routes.