I’m old enough to remember when cinemas were still a throwback to the theatres that they replaced. They used to have magical names like the Essoldo, the Alhambra or the Astoria where uniformed commissionaires used to organise the queues of moviegoers who would line up for separate performances. Regardless of programme times, you could still take your seat halfway through a film and then sit right through the programme and stay for the part you had missed. Usually there would also be an usherette with a red beamed torch to show you to your seat if the lights had already been turned down.  As children growing up in south London, our favourite venue was the Astoria, Brixton (now the Academy) where the interior of the auditorium was decorated and modelled to resemble a Moorish palace.  Just gazing up and all around, instead of at the screen, was entertainment in itself.

Inside the auditorium of the Astoria Brixton – picture courtesy of Brixtonia.com

As well as the smartly dressed commissionaire there would also be ladies selling ice creams and cold drinks from large trays hanging from their necks. If you went to the pictures on a regular basis you might have your particular favourite, or you might want to chop and change: Kia-ora orange squash, Mivvi, Walls or Lyons Maid ice cream, or just salted peanuts.  We didn’t supersize, nor did we munch from giant buckets of popcorn washed down with a gallon or two of a heavily carbonated drink.

When I was still quite young, and even into my teens, we hadn’t become heavily Americanised, hence the difference between refreshments then and now.  We went to the pictures to see a film, never to a movie house to see a movie.  The main feature may probably have been an American import, but the Pearl and Dean adverts (ba ba ba ba ba ba ba ba ba…) and the ‘Look at Life’ short films were as British as they could be.  Especially with the precisely enunciated voiceovers that would introduce us to events and occupations in and around our island as well as in other countries of the world.

Most people would go to see a film weekly and the two main chains (ABC and Odeon) showed new releases on a weekly basis.  You eagerly awaited the latest production featuring your favourite films stars, or even singers.  For an Elvis fan like me, the only chance you would have of seeing your idol was on the silver screen, where he would appear larger than life.  Fans followed their favourite heart throb actors, be they Steve McQueen, Paul Newman or Marilyn Monroe.  Of course our parents would have had different priorities, including Humphrey Bogart, Gregory Peck or Bette Davis.

If you didn’t want to wait for a film to go on local release you could always go ‘Up West’ to enjoy a film in one of the more plush Leicester Square cinemas, although you had to be prepared to pay the difference in cost.

Nowadays cinemas seem to have lost a great deal of their former glamour.  Although we are still in a recession, somehow seeing a film doesn’t offer the escape that it would have presented during the 1930s and the dark days of World War II.  Film stars no longer have the charisma they once had.  They sell their stories to magazines like Closer and Heat and people try to emulate them and their life styles.

With these changes in viewing habits cinema venues have also undergone a major alteration.  Many of the old movie theatres have been demolished or restructured.  Large picture houses have been converted into venues that can show two, three or four films in smaller ‘screens’ and large multiplexes have been constructed, often in conjunction with shopping malls, so that viewers have a much larger choice of films to watch at any given time.  Of course there are still cinemas up and down the country, such as the Phoenix in East Finchley, that defy this trend and are classed as art house cinemas, showing independent and foreign films.  Some of them retain the picture palace traditions of the 1920s and 1930s when they were built, and have been extensively renovated to restore them to their former art deco grandeur.

On a visit to Totnes in Devon my daughter took me to see ‘A Long Walk to Freedom’ in a converted barn on the Dartington Estate; a cosy cinema with its original vaulted beamed ceiling, where the seats are conveniently raked so that everybody had a good view of the screen. 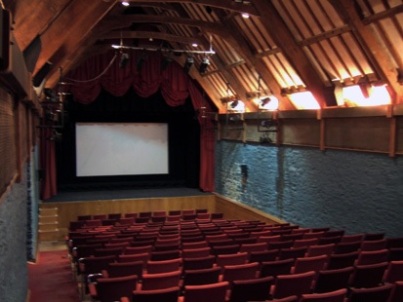 Perhaps as more and more people buy larger and larger televisions for their living rooms, there will be even fewer visits to the cinema.  Why venture out on a cold wintry night to see a film with a host of other people, all munching away at their popcorn and slurping their CocaCola, if you can watch in the comfort of your own home?  On the other hand you can still visit some beautiful old picture palaces, such as the Duke of York’s Picture House in Brighton.  Opened on 22 September 1910 it is Britain’s oldest purpose built cinema that has continued to screen films for longer than a century. I think I would rather join the queue for the 5 shilling and sixpenny seats (or whatever the equivalent cost is now) outside that kind of building than watch a DVD on my home television.

The Duke of York’s Picture House – picture courtesy of Wikipedia