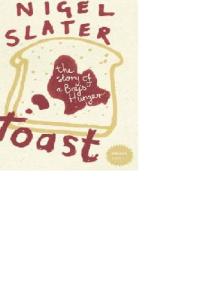 Nigel Slater is my favourite cookery writer and TV food presenter.  I refuse to call him a television chef, because he isn’t, but he understands food and how different flavours and textures work together.  His cookery books aren’t at all fussy or precise and he makes it very clear that cooking is a very personal practice that can be varied as the cook wishes.  But his recipes draw in the reader, make your mouth water, and make you want to rush off to the kitchen to start trying the dishes for yourself.

In this memoir he revisits his early and teen years using the sensory memories of different foods.  I was amazed at his recall of so many different items, especially the sweets.  I’m only a few years older than him, but I’d forgotten about some of the sweets he clearly remembers.  However he managed to sweep me back to my younger days of ‘Beatlegum’ (and the smell returned with the memory), Clarnico Mint Creams (my grandma used to eat them), pear drops smelling of nail varnish remover and the original Walnut Whips.  Back in the 1960s we weren’t very sophisticated on a culinary level, and I also remember when puddings tended to be fruit out of a tin, and when school dinners were atrocious, but you were forced to eat them regardless, including drinking the lukewarm school milk.  His food reminiscences work in tandem with his home life, his mother’s illness, his father’s remarriage, and later his father’s death.

He evokes experiences and encourages the reader to share his own teenage and adolescent growing pains, his mother’s loss, his difficulties with his stepmother, his early sexual adventures and his realisation that cooking is all he wants to do.  Each section (they’re hardly long enough to be chapters) bears the title of an item of food and it’s as if he’s sharing memories and experiences with the reader, and not recounting a linear autobiography.